Kiran Kelly and Arabella Tucker in the Winner’s Enclosure!

In case you missed it, on Friday 5th July, saw two races exclusively for stable staff held at Doncaster and Newton Abbot racecourses. The events marked the penultimate day of Racing Staff Week and were thrilling additions the week’s worth of activities celebrating, and shining a light on racing’s workforce.

The 7f Betfair Clock Tower Cup was held at Doncaster racecourse, where Kiran Kelly gave Fieldsman a great ride to come home 3 ¼ lengths ahead of the pack for trainer Tony Carroll. Freddy Whaley on Port Soif and Bailey Burns-Lewis on Jedd O’Keeffe’s Rebel State fought for second and third and a photo was needed to make the final call. Freddy just clinched second for trainer Scot Dixon.

“I can’t really explain [the feeling] to be honest. It’s always been what I wanted to ride in a race, now I can say I’ve done it and ridden a winner!” Kiran Kelly

The last race at Newton Abbot, was the Betfair Racing Staff Week Cup which was run over 1m 4f. Making it a treble on the day for owner and trainer John Flint, Arabella Tucker rode a fantastic race on Native Soldier to come home in front. Again second and third was a tight finish but Charlotte Bond managed to just keep Agent Gibbs’ nose in-front ahead, for trainer John O’Shea. Primogeniture, ridden by Jasmin Richards for Martin Keighley, was just nudged into third.

“It’s an incredible experience and for a great cause. Everyone taking part had a brilliant time. I think it’s just amazing that the race allows stable staff to get on the track for the day and have a bit of fun. It’s brilliant, just brilliant.” Arabella Tucker

Fancy watching it again, or thinking about entering next year? Watch both races in full via Racing Welfare’s YouTube channel.

A huge well done to everyone who took part! The standard of riding, professionalism and sportsmanship was exceptional.

© 2018 Racing Groom. Powered by the NTF. All rights reserved.
Font Resize
Sean Murray winner of the 2019 Toby Balding Award for training tells us more about his journey since winning.Blog 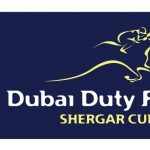